What does youth development require?

What does youth development require?

The first youth multilateral development festival under the NLD was held in Yangon on November 1. The government says it aims to increase youth communication and aims to develop in all fields.

However, there are criticisms that young people are less directly involved in practical problems and less able to speak politically.

Yangon Mayor Maung Maung Soe said the purpose of the festival is to inspire young people to be physically, physically and emotionally active. Intellectual And he said, I am. Yes, I am. It is said to be a five-ton balm.

Education Minister At the opening ceremony, there were some young people who staunchly protested that the festival should not be politically active for young people. Zelin Mon, an experienced youth activist at home and abroad, wants the festival to be held annually.

He also pointed out that young people do not have the opportunity to express their political views on ending conflict based on peace and ethnic diversity. 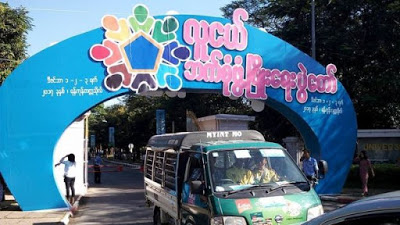 There are indications that there is a need for strengthening an education system based on critical thinking and career opportunities, which is an important resource for young people to play a practical role in young people. The students of Yangon University attended the Youth Development Summit on Sunday. University students came.

The galleries along the Thanlyin Road include education-related galleries, such as sporting events, sports and events. The bookstore also features a concert titled Peace Concert.